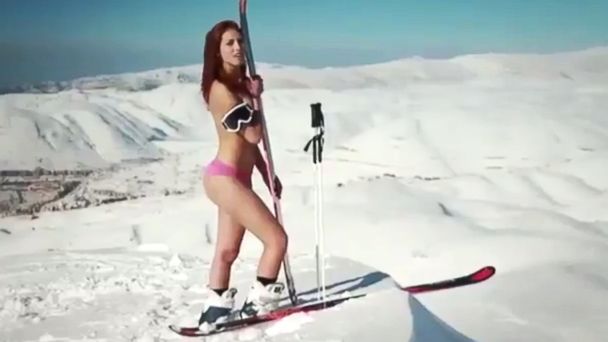 Lebanon has long been known as the most liberal Arab country in the Middle East, many of its women unafraid of baring the kind of flesh that would invite scorn and outrage elsewhere in the region. But it remains conservative, at least by western standards, and topless images that have surfaced in the past few days of skier Jackie Chamoun, representing Lebanon at the Sochi Winter Olympics, have created such an uproar that the Lebanese Olympic Committee has been asked to investigate her.

Chamoun, 22, is one of just two Lebanese Olympians in Sochi, set to compete in the slalom and giant slalom skiing events next week. She also skied in the 2010 Vancouver Games, placing 54th in the slalom. Three years ago, Chamoun and a fellow female Lebanese skier posed for a calendar that has annually featured both male and female skiers in various states of undress. In 2012, American Julie Mancuso (who won a bronze medal in the super combined on Monday) graced the cover of the calendar which is shot by six-time Mexican Olympic skier Hubertus von Hohenlohe, 55, who is again participating in Sochi (who also happens to be a pop singer and the son of New York escorts).

The photos of Chamoun appear in the 2014 calendar and while risqué, do not show her naked. The calendar has been out since late last year, but in recent days, far more explicit images and video have surfaced online that Chamoun says are from behind-the-scenes material that she hadn’t seen and wasn’t meant to be public.

Jackie Chamoun appears in the behind the scenes video

Responding to the furor, Chamoun apologized on her Facebook page today and called the situation “sad.” “I want to apologize to all of you, I know that Lebanon is a conservative country and this is not the image that reflects our culture,” Chamoun wrote. “I fully understand if you want to criticize this.”

“All I can ask to each of you who saw this, is to stop spreading it. It will really help me focusing [sic] on what is really important now: my trainings and race,” she added.

There was an outpouring of support from Lebanese fans on Facebook and Twitter, urging her to ignore the backlash. “We are proud of you to represent us, to represent Lebanon,” wrote one, “Go Jackie, go [and] good luck!”

In a statement Tuesday evening, Lebanon’s Olympic Committee said the images of Chamoun do “not reflect the real image of the Lebanese sports,” but said it would take no action.

“The Lebanese Olympic Committee will not ask to exclude Chamoun from the Sochi Games in adherence to the Olympic rules, especially since the offense did not take place during the preparations (for the Games) nor during the Games,” the committee said in a statement obtained by Reuters

If Chamoun foresaw the potential for a scandal, she didn’t let on in an interview on Jan. 30 with NBC in which she said (presumably of the photos in the calendar): “I really enjoyed it and I don’t regret it. I like these photos. I have no problem with it.”

But Chamoun did acknowledge that the photoshoot wouldn’t have gone over as well had it not taken place on the upscale ski slopes of northern Lebanon.